Communiqué one year after the murder of rarámuri defender Julián Carrillo

One year after the murder of our companion Carrillo, the defenders of the Sierra Tarahumara demand justice, the cessation of dispossession and the end of violence

To the national and the international media

The civil society organization Alianza Sierra Madre invites the general public to participate and express their solidarity in the commemorative activities for the first anniversary of the death of the Rarámuri human rights defender Julián Carrillo Martínez. Julián Carrillo Martínez, together with this community Coloradas de la Virgen, Municipality of Guadalupe y Calvo (Chihuahua, México) had publicly denounced the dispossession of forest as well as mining concessions in his ancestral land.

Our companion Julian Had been incorporated into the Mechanism for the Protection of Human Rights Defenders and Journalists of the Interior Ministry (SEGOB). Nevertheless, he was assassinated on the 24th of October 2028 in the Sierra Tarahumara. For many decades, the indigenous Rarámuri (Tarahumara) an Odami (Tepehuan) in the state of Chihuahua have struggled for the defence of their ancestral land rights, acknowledged by the ILO convention No. 169. Indigenous struggled challenge the dispossession of common property, the extraction of natural resources and strive to put an end to the wave of violence and assassinations confronted by indigenous communities.

We know that indigenous peoples are not alone in their struggle for dignity, and therefore we invite you to show solidarity to demand justice for Julián Carillo, is family and community of murder, we invite you to come to the plaza Hidalgo, located in front of the Government Place of the state of Chihuahua, where we will install a commemorative cross and display a mural painting, which in the future will become part of a travelling exhibition. The painting was made by voluntary artists from the collectives Rezizte and Madroño, from Chihuahua and Ciudad Juárez respectively.

A presentative of the community and Julián´s family will speak to the public, so you can learn more about their struggle and longings and participate to strengthen it and collectively honour the memory of the defenders of the sierra. Also representatives of Amnesty International and the Centre for the Human Rights of Women (CEDEHM), who accompany us in the search for truth and justice, will participate in the event. 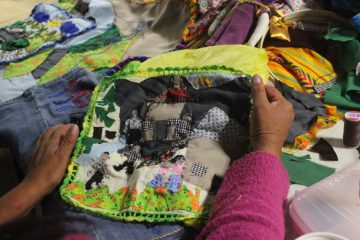 Conclusion of the workshop for arpillera (burlap)-making: embroidery that tells stories of pain and hope